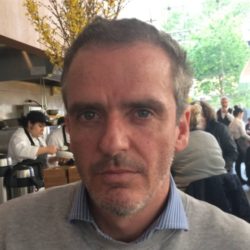 In 2002 and 2003, Northern Irish photographer Donovan Wylie captured images of the high-security prison known as ‘Her Majesty’s Prison Maze’. The prison, which was closed in 2000, was named for the nearby town of Maze, located by Lisburn in Northern Ireland. In a conceptual search for traces, Wylie investigates the structure of this place, whose history of violent protests, hunger strikes, escapes and casualties played a significant role during the conflict in Northern Ireland from 1969 until 1998. He systematically approaches the complex from outside to inside, meticulously documenting the surrounding walls, fences and safety strips, the interior spaces of the characteristic H-Block, the corridors and cells. The serial repetition of his photos reveals the historical debris, the psychological function of geometric constructions that lead to disorientation, and the controlling architecture of power.